Diamondhands and the $184M Stash 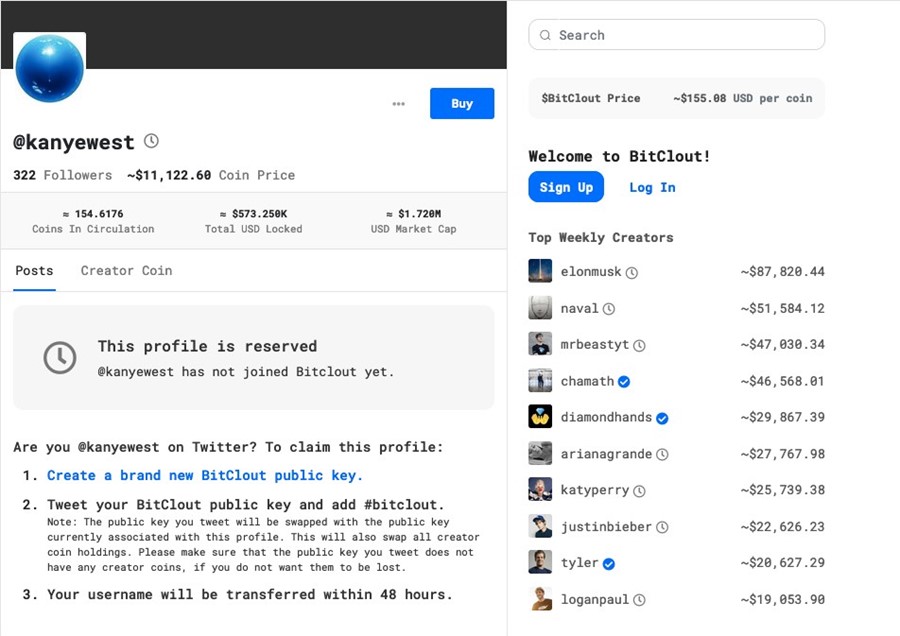 There’s a lot of talk in Silicon Valley circles and on Twitter about a company that recently launched called BitClout.  There is an air of mystery about the quasi-anonymous founder called Diamondhands and generally a love-hate relationship between the company and the crypto community.

What is BitClout?
It’s a decentralized social network that lets you buy and trade coins of your favorite Twitter celebrities based upon their reputation.  It’s like a stock market for social reputation.  You have to buy the native coin of the platform, BTCLT, with Bitcoin and then you can use your Bitcoin to buy “creator coins” of your favorite celebrities.  Those deposits, plus investment from some high profile investors, add up to about $184 million, according to some reports, that is in a crypto wallet controlled by the company.  A nice haul indeed.

The company has created on its own accord 15,000 profiles on the site of celebrities that are popular on Twitter.  The celebrities are encouraged to come and “claim” their profiles.  In order to do so, they only have to tweet about them joining the platform along with the hashtag #bitclout – pretty ingenious growth hack, we must say.

The celebs are entitled to a portion of the creator coins associated with their identity which can be a sizeable dollar value – Elon Musk would get around $12.7M in coin, for example, if he claimed his profile.

Who is Diamondhands?
The founder of the company goes by the name Diamondhands, which BTW in Reddit speak means someone who holds a strong position in a stock.  But it’s an open secret as to who Diamondhands really is – Nader Al-Naji, a former Google engineer and founder of the defunct company Basis.

Once the money goes in…
You have to buy BTCLT with Bitcoin to do anything on the site, but there is no way currently to withdraw your money, either in cash or BTC.  Hmm, that’s a red flag.  When you go to take money out, you get the comforting message: “BitClout is under brief maintenance. All funds are safe. Thank you for your support. We’ll be back shortly.”

But the news is full of naysayers, while the smart money is all in on the Bitclout bet.  The positive side of the story is that this is a whole new paradigm for social media, and one that aligns the interests of the creators with direct monetization of the content they produce without selling ads or giving away your identity to a social media behemoth.

“To me, it’s just a matter of time before everybody sees where the right side of history is,” Diamondhands said.

Easy peasy to share this story with your peeps

Level up your inbox with The Scroll

Business news focused on startups and tech. Get informed while being very mildly entertained.

No spam. No fluff. No nonsense. Ever.

Join the band, it's free.

Great, you saw something you liked and visted the site.

But guess what? We're actually an email-first news company
bringing you the information you need to know in business, startups and tech.

Great, you saw something you liked and visted the site. But guess what? We're actually an email-first news company bringing you the information you need to know in business, startups and tech.

So, if you like what you see, give the email a try.